It truly is in a category unto itself, there’s nothing like it, and it has no peers in the world of golf. Those are three ways to describe The Pete Dye Course (8670 West State Road 56, French Lick; 812-936-8062) at the French Lick Resort in French Lick, Indiana. 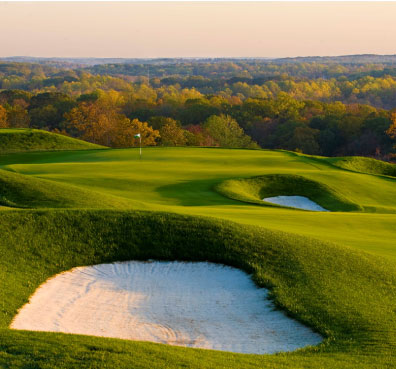 The 10th green at The Pete Dye Course in French Lick — with the Hoosier National Forest in the background. 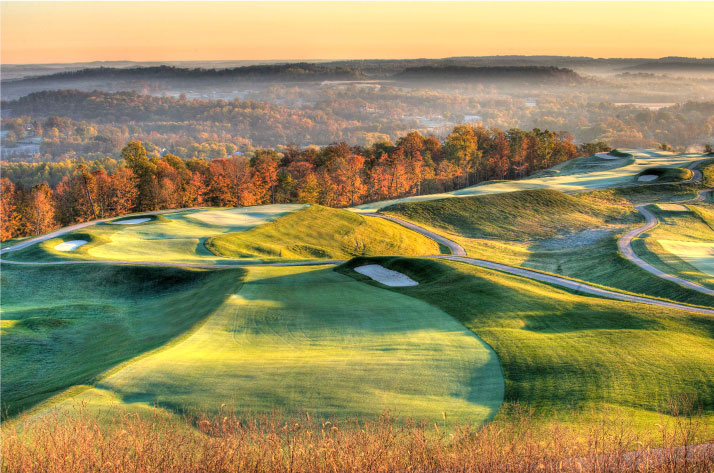 The view of The Pete Dye Course in French Lick, on a beautiful fall day, with an impressive view of southern Indiana in the distance.

The hilltop peak, where The Pete Dye Course clubhouse stands, is Mt. Airie — 972 feet high and roughly 450 feet above nearby French Lick. It’s worth the trip to this Hoosier ‘mountaintop,’ even if you are not a golfer.

When you arrive at the clubhouse, aka the Mansion, it’s Indiana’s second highest elevation point and it probably has the best view of any vantage point in the Midwest. It’s Indiana’s own ‘Rocky Mountain High’ – a 360-degree view of southern Indiana and the surrounding Hoosier National Forest. From many parts of this golf course, you can see at least 30 miles in every direction. When Pete Dye built this course, he wanted to give golfers a panoramic view of southern Indiana. Dye succeeded and may have actually exceeded his own expectations.

“As I built the golf course, I tried to get the tees, the fairways, and the greens in position that they have these long views over the valleys and hills,” stated Dye, the hall of fame architect who is from Indiana. “The ambience of the course is the look, the vistas from all the different tees, greens and fairways.”

Even though The Pete Dye Course has only been in existence since 2009, it has attracted some major golf events such as the 2015 Senior PGA Championship (won by Colin Montgomerie) and the Senior LPGA Championship, presented by Old National Bank, in 2017 (won by Trish Johnson) and 2018 (won by Laura Davies) and in 2019 (won by Helen Afredsson).

The most dramatic stretch on The Pete Dye Course is the early part of the back nine – 11, 12, 13, and 14. On the 11th, steer clear of the volcano bunkers which hug the fairway along the right. The 12th is a true three-shot par five with a massive green. The views of the area as you play the par-three 13th are memory makers. The 14th is the Signature Hole at The Pete Dye Course. It’s a lengthy par five with a split fairway, divided by a massive green hollow. Pars are celebrated at the 14th. And, when you play the dogleg, right-to-left, par-five 18th hole, it’s a visually powerful way to conclude your journey at The Pete Dye Course. Your views of the surrounding southern Indiana hills with the clubhouse in the immediate background are images which will remain in the forefront of your memory bank for the rest of your golfing life. And, the view of the Mansion as you play the 9th hole has caused some people to feel that the current 9th hole might be a better backdrop for an 18th hole than the existing one.

When you play The Pete Dye Course, you are required to hire a forecaddie. It’s a worthwhile expense because they will help you find your ball when it veers into the rough. More importantly, they will also give you great reads on every putt on every green and provide you with sound advice on what is the best route and direction of your tee shots. Those forecaddies know The Pete Dye Course like the back of their hand, if not better than you know the back of your hand!

After your round, consider having lunch or the Sunset dinner at the Mansion. The Mansion was originally the home built by former Indianapolis Mayor Thomas Taggart for his son Thomas D. Taggart and his family. The Taggart family owned the French Lick Springs Hotel from 1901-1946. The views of southern Indiana from the Mansion are unobstructed and unmatched. Reservations are required for lunch and for the Sunset dinners which are only held on Sunday nights in the summer. The most popular dinner appetizers are the shrimp cocktail and the BLT deviled eggs. The most popular entrees are the bacon-wrapped filet mignon or the sea bass with lemon caper crème sauce, both served with roasted red skin potatoes and asparagus. The chef’s desserts change daily.

Not surprisingly, The Pete Dye Course in French Lick is also one of the seven golf courses that is part of Indiana’s Pete Dye Golf Trail.
In 2019, the French Lick Resort was selected among the Editors’ Choice Award by Golf Digest as one of the Best Golf Resorts in the Midwest and, most recently, its Pete Dye and Donald Ross courses were ranked among the publication’s list of America’s 100 Greatest Public Courses. The Pete Dye Course moved up two spots to No. 17 on the list and the Donald Ross Course was ranked No. 99. And, The Pete Dye Course is ranked #1 in Indiana on GolfWeek’s “Best Courses You Can Play” list.

Are you ready to make the trek to The Pete Dye Course in French Lick and head to the top of Mt. Airie? The forecaddies await your arrival.