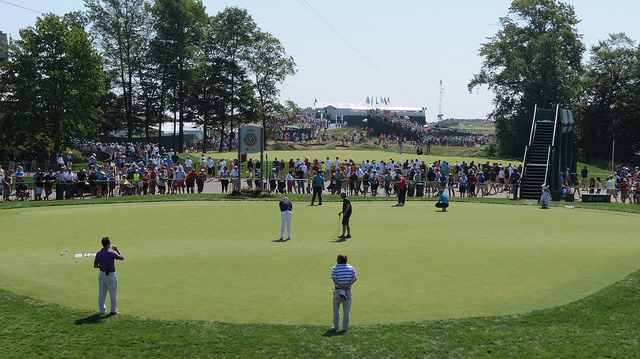 Find more photos from the PGA Championship in our Flickr album here.

Day was playing in his sixth PGA Championship. Before today, his best finish in this Championship was T-8 in 2013 at Oak Hill. The win was the fifth of his career; two have come in three weeks. He won the RBC Canadian Open on July 26.

A WEEK TO REMEMBER

Not only did Jason Day pocket his first major championship today, he did it while recording the lowest 72-hole score in relation to par in the history of major-championship golf. Day’s 20-under-par, 268 total this week at Whistling Straits bested the former mark, 19-under-par, set by Tiger Woods during the 2000 Open Championship.

Before Jason Day finished a 20-under-par for the Championship, only one player in the history of major-championship golf had ever touched the lofty status of 20-under, but even that was for just a few holes. In 2000, Tiger Woods reached 20-under in the final round of the Open Championship at St. Andrews, but he bogeyed 17 to finish at 19-under-par.

THE LOW DOWN FROM DOWN UNDER

With a 27-year-old Jason Day winning today at Whistling Straits, five of the last six PGA Championships have been won by players in their 20s. The streak began right here at Whistling Straits in 2010, when a then 25-year-old Martin Kaymer won in a playoff. Since then, 20-somethings Day, Keegan Bradley (25 years-old in 2011) and Rory McIlroy (23 in 2012, 25 in ’14) have accounted for four more for PGA Championships. The lone exception during the six-year run was Jason Dufner (36 in 2013).

Prior to Kaymer’s 2010 victory on the Straits Course, the last player under 30 to win the PGA was Tiger Woods, who was 24 upon winning at Valhalla in 2000.

Jason Day posted four birdies in as many days on Whistling Straits’ par-5, 603-yard 5th hole, which is appropriately dubbed, “The Snake.”

Jason Day’s successful birdie putt of 49-feet, 5 inches on the 7th hole today was only four inches shy of his longest made putt of the season. In the second round of the RBC Canadian Open last month, Day rolled in a 49’9” putt on the 12th hole.

SAVING THE BEST FOR LAST

By virtue of Jason Day’s victory today, for the 17th time in the last 19 years, the PGA Champions emerged from the final pairing of the afternoon.

By coupling the PGA Championship finishes of Jordan Spieth (second) and Rory McIlroy (17th), Spieth officially assumed the mantle as the No. 1 player in the Official World Golf Rankings.