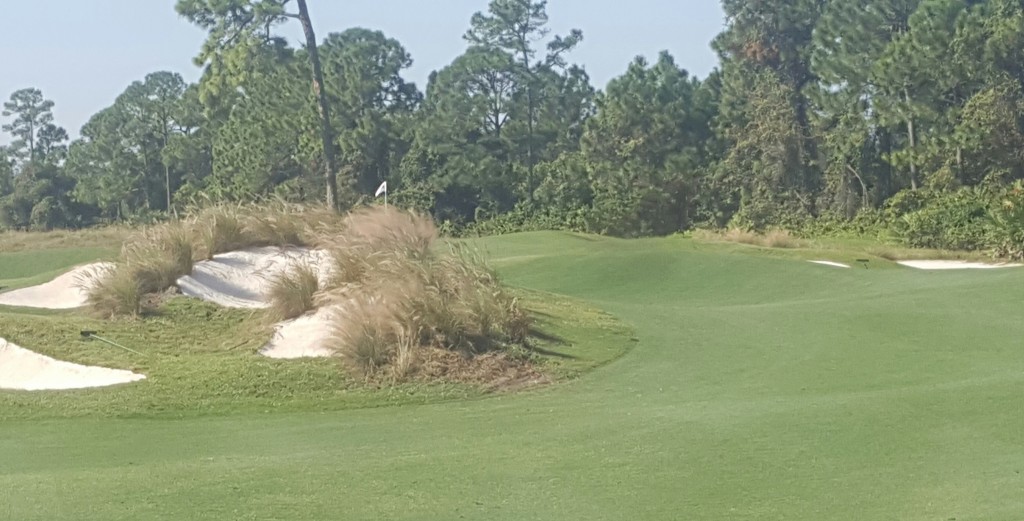 Pete Dye’s bunkers were the talk of the day at the re-opening of the Dye Course at PGA Golf Club.

PORT ST. LUCIE, Florida – The PGA Golf Club is the winter home of the PGA of America’s 28,000 members. It’s also one of just two facilities in America that the PGA operates, the other being Valhalla – the organization’s premier tournament venue in Louisville, Ky.
PGA Golf Club, with its four 18-hole courses plus a six-hole short course and elaborate learning center, is one of the nation’s top golf resorts. That’s why this week’s re-opening of its Dye Course will have an immediate impact on the game nation-wide. Visitors, both from all parts of the U.S. as well as other countries, will soon be arriving here with a new, most attractive playing option.

The Dye, created by legendary architect Pete Dye, was the third course built at PGA Golf Club. It opened in 2000, four years after two Tom Fazio designs – The Wanamaker and The Ryder. The Dye is the only course at the 20-year old resort not designed by a Fazio; Tom’s brother Jim designed the other, St. Lucie Trails. 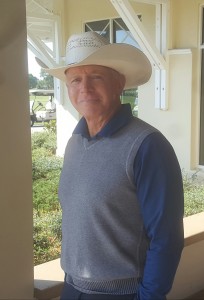 Work on The Dye began in May and the re-opening was delayed two weeks after Hurricane Matthew visited the area. Director of agronomy Dick Gray said the course “isn’t perfect” yet but it’s more than ready to take players and Gray expects the last remnants of the hurricane will be gone in a month.

To be sure, The Dye needed work. Over years of play it had ceased to look like a Pete Dye-designed golf course. The greens had gotten smaller and some of the bunkers had disappeared, only to be re-discovered during the renovation in which Celebration Bermuda was used to re-grass the fairways and Tifeagle was used for the new putting surfaces. Dye, soon to turn 91 years old, was only minimally involved the restoration project.

“We don’t do anything without Pete taking a look at it first,” said Gray, a fellow Indiana native who has known the Hall of Fame designer for nearly 50 years. “We had him out in late April and he’s OK with everything we’ve done. Obviously he was a little distressed by the way it started, but Pete’s back in our corner.” 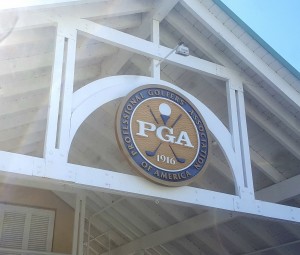 Dye hasn’t seen the finished product yet but may visit next week when he’s being inducted into the Florida Golf Hall of Fame.

“It’s my guess he’ll be more than satisfied with the way the course now looks and feels,” said Gray.

That could well be the case, as the course will look much different than the last time Dye saw it.

“The greens are much bigger, with many more pin placements,” said Gray, “but with Pete’s courses it’s like going on a treasure hunt. You go out and find something you didn’t know was there. I couldn’t tell you how many peripheral bunkers we found. It was a restoration project, but it was a reclamation in places, too.”

The digging most notably revealed six bunkers that had existed behind the No. 9 green, but there were more at Nos. 5, 10, 11 and 18 and Gray suspects more hidden bunkers are still out there.

Reviving The Dye was just the latest step in an upgrading of the resort that started after the number of rounds played fell to what general manager Jimmy Terry called “the lows of three-four years ago.” 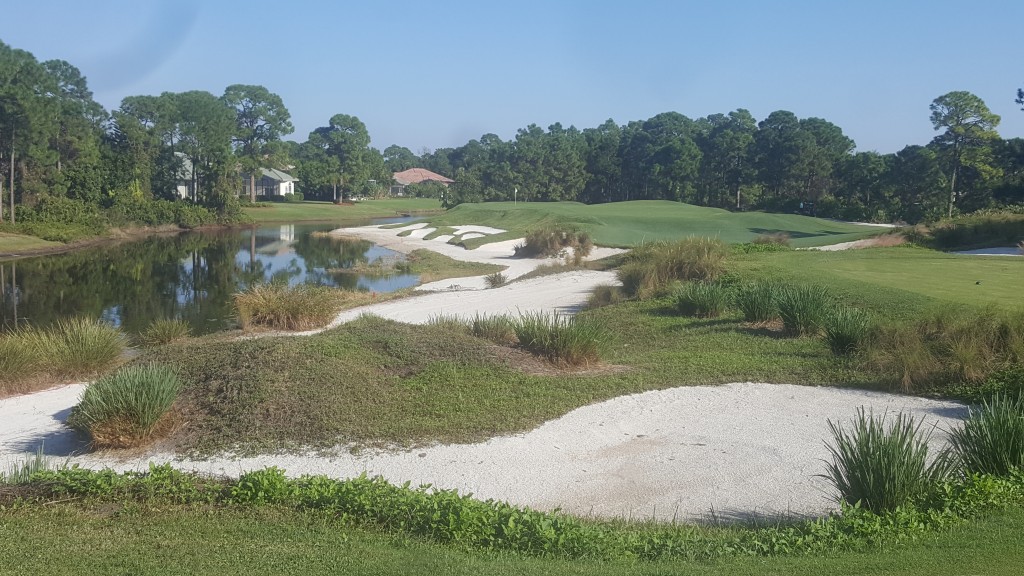 No bunkers anywhere look quite like the many Pete Dye designed at PGA Golf Club.

“We saw the challenge and we’re 3 ½ years into a five-year (improvement) plan,” said Terry. “We’ve had the absolute support from the PGA of America on what we wanted to do. We started simple, to make sure our golf courses are commensurate with the PGA of America so that its members will be proud to call it their winter home.”

The first year of upgrades dealt with agronomy, with work done on the greens at St. Lucie Trail. That course, private when the upgrading began, took on its present name, was made semi-private and its pricing structure was changed.

In the second year the focus was on the clubhouse. Work was completed last year, but the tweaking continues. The facility was expanded and memorabilia added, most notably replicas of the trophies presented to the winners of the four major annual championships – the Masters, U.S. Open, British Open and PGA Championship. It makes for a nice photo opportunity. 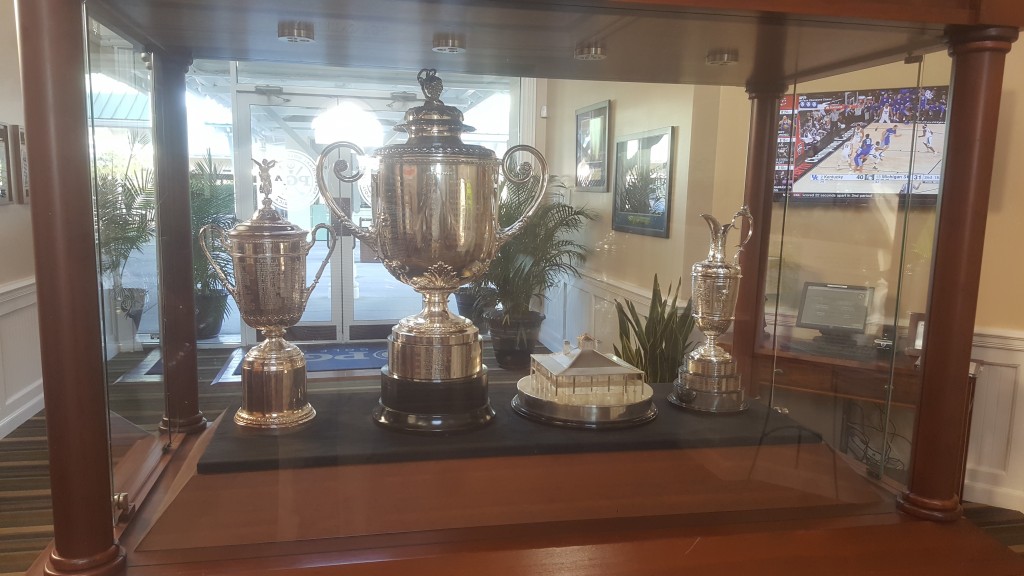 Players at PGA Golf Club can get their picture taken with the four major championship trophies.

The fairways and greens of The Wanamaker were upgraded last year and The Ryder was to get the same treatment right after that.

“Because we had a couple large events scheduled there this fall we didn’t want to take the risk,’’ said Terry. One of the tournaments, the PGA Senior Professional Championship, is on tap on that course this week.

So, work was started on The Dye instead but The Ryder is going to get a facelift, too.

“We’ll do The Ryder Course next year,” said Terry. “At the end of the five years we’ll have touched every golf course and the clubhouse. The response from our members has been very positive. Our private club memberships have the highest they’ve ever been and the rounds of golf are back to a level where we’re happy with them.”