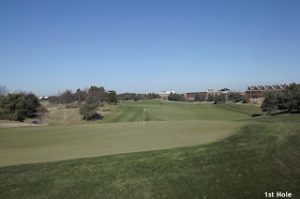 The North Shore of Chicagoland is stocked with historic, well-heeled country clubs dating back to the golden age of golf design from the early 20th century.  So when The Glen Club came to be at the start of the 21st century, the new kid on the private club block needed a way to differentiate itself from the well-established competition. Start with a championship course by a highly regarded architect.  Add in a modern 48,000 square foot clubhouse.  Offer initiation and membership fees far below neighboring clubs.  Anything else? 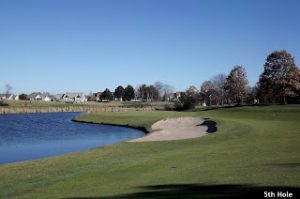 Enter the Private Club / Public Access concept.  Although The Glen Club provides all the amenities commonly found at private clubs, the opportunity for the public to play the Tom Fazio designed course is a significant break from the traditional country club model.  “About 70% of the rounds are played by club members, with the balance filled by the public,” shared Ethan Roush, Head Golf Professional at The Glen Club.  Members are allowed to secure tee times up to 30 days in advance, while the public is restricted to 7 days advanced booking.

“Most of the prime weekend tee times will be filled by members, but weekday and weekend afternoon times can be found by non-members who want to experience The Glen Club,” provided Roush, who played on the Northern Illinois golf team and has been at The Glen Club since 2013 after stops at The Merit Club and Bolingbrook. 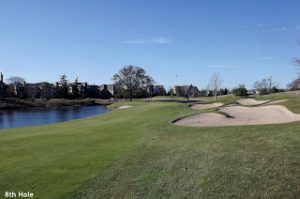 The story of The Glen Club is in itself unusual.  Tom Fazio was hired to create a golf destination on the site of the former Glenview Naval Air Station, a flat, featureless stretch of suburban concrete and asphalt.  The end result of his labor is a 7,200 yard par 72 layout featuring elevation changes, several lakes and streams, acres of prairie grasses and stands of hardwoods and evergreens spread across 195 acres.  Since its opening in 2001, The Glen Club has been a regular on several golf publication lists of “Best Courses you can Play”. 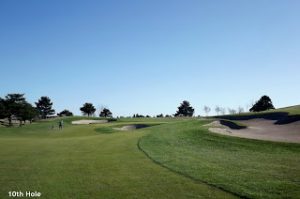 Although The Glen Club provides the general golfing public access to the course, the cost will guarantee that only serious golfers will make the trek to Glenview to tee it up.  In season green fees in 2017 topped out at $195 to walk, and a cart will tack on another $25, a full $65 more than the $155 charged by Cog Hill #4.  But summer early morning weekday and twilight rates are as low as $105, and the Spring and Fall season provides further discounts to attract the curious public. 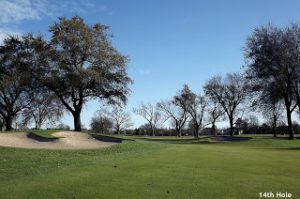 I made my first visit to TGC the day after Thanksgiving and took advantage of the $70 rate at the close of the season on an unseasonably warm 60 degree day.  The course was a manageable walk for this senior citizen, and the track provided the kind of dramatic eye candy expected for the price.  Wide and receptive landing zones beckon off most tees, but the undulating greens guarded by deep bunkers is the main challenge that lends to the 75.3 rating / 142 slope.  Several greens are perched at the very edge of water, with the par three 11th and 17th greens precariously positioned at opposite sides above the hazard. 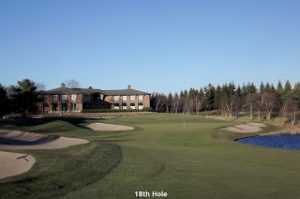 But the highest praise I can share is that the course felt like it had always been there, with little trace of the military base that resided here for over 70 years.  My late season trip to TGC guarantees that I will make a return when the greens roll true, the trees are leafy green and the native grasses are swaying in the wind.  For more information on The Glen Club, visit www.theglenclub.com.