ERIN, Wis. – Erin Hills has gotten nothing but better since its opening in 2006. That was clearly evident when the facility on the outskirts of Milwaukee conducted what has become an annual outing leading into its ultimate showing – as the site of the 2017 U.S. Open.

Jim Reinhart, general chairman for the big event, was presented with a good opportunity to compare Erin Hills with a similar facility. Chambers Bay, in Washington, hosted a U.S. Open that wasn’t without controversy a week before Erin opened its doors to about 50 media members from around the Midwest.

“Both courses are in new areas that had never hosted a U.S. Open,” said Reinhart. “Both have incredible community support. Both areas are naturally beautiful, but Chambers Bay was manufactured on a gravel pit while Erin Hills’ architects took advantage of a more natural area. Both have fescue fairways, and both play long. Erin Hills is not a true links-style course. Chambers Bay is much more a links style. We have eight times as many trees – we have eight!”

Inevitably, though, the subject of Chambers Bays’ perceived shortcomings came up. Players didn’t like the bumpy greens there and the course wasn’t spectator-friendly.

“You have to put it in perspective. It’s a U.S. Open, and they bitch,” Reinhart said of the player complaints, the most notable coming from Billy Horschel and legendary competitor Gary Player. “That’s what the USGA does. It gets into their heads. There was a lot of grumbling out there. We took notice of some of that but, when they get out here in two years, they’ll be blown away.” 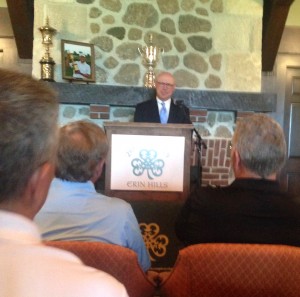 Given the history of the U.S. Open, however, it’s unlikely that players will unanimously be in love with Erin Hills. U.S. Open courses always get tough setups, and Erin Hills will, too.

On the spectator side, though, things should be much, much better than they were at Chambers Bay.

“This golf course, overlooking Holy Hill, will be mind-boggling,” said Reinhart. “At first I was a little scared (after the criticisms started to build about Chambers Bay), but then I thought ‘This is going to be super for us.’ We’ll knock the ball out of the park here.”

No argument there, especially when you consider the spectator space available throughout the course and especially on the last three holes.

“Nos. 16, 17 and 18 coming down the stretch will be filled with spectators who will have a perfect view of the most important holes of the entire championship,” said Reinhart. “It’ll be an absolute home run.”

As for the facility and tournament update, Reinhart reported that the U.S. Golf Assn. would put staffers on the premises full-time beginning in July. Corporate hospitality sales for 2017 have begun, and are way ahead of schedule. Recruitment of volunteers will begin soon. 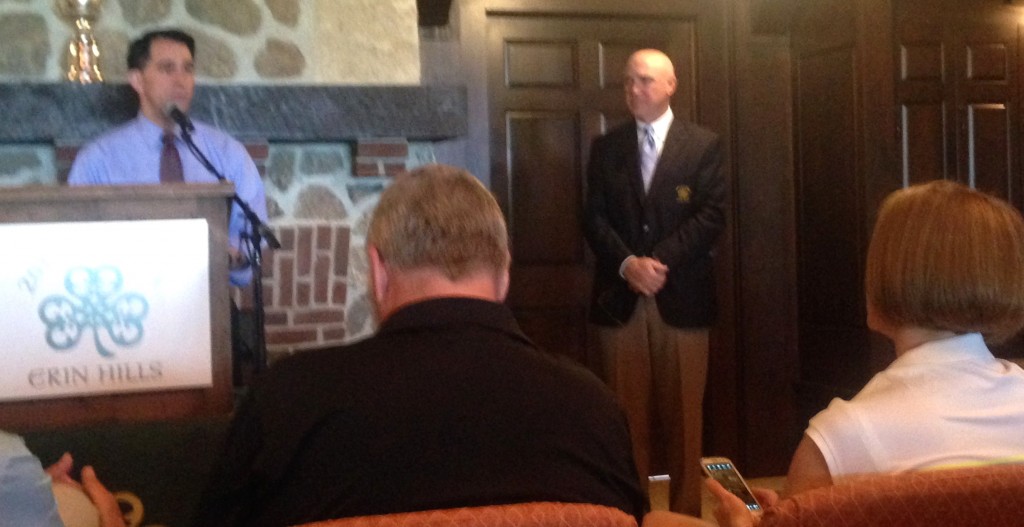 Governor Scott Walker, with Reinhart looking on, stresses the value of golf to Wisconsin residents.

Since the previous year’s update outing Erin Hills has changed the green on the No. 3 hole, put in a beautiful short game area, created a new practice putting green near the No. 1 tee and created several new tees. Some of those were built to enhance daily play, but those at Nos. 2 and 15 created reachable par-4s that should appeal to USGA executive director Mike Davis.

Scott Walker, Wisconsin governor and presidential candidate, was also on hand to predict an “incredible” U.S. Open and laud the growth of the sport in his state, which has about 500 courses.

“I’m not a golfer,” he said. “The reason I’m here is because of the green on the greens.”

Here’s an even more interesting stat. Erin Hills’ biggest event so far has been being the main course used for the 2011 U.S. Amateur, won by Kelly Kraft. That was only four years ago, but the contestants since them have accumulated $38,450,796 in prize money as professionals, won eight tournaments, had 75 top-10 finishes and 152 top-25 finishes. Those stunning numbers should indicate the caliber of play coming in August at Olympia Fields, site of this year’s U.S. Amateur.

Jordan Spieth, who won at Chambers Bay, didn’t win at Erin Hills when he was an amateur. He lost in the quarterfinals.

More memories will be built at the course this season on the local level. Erin Hills will host this summer’s Wisconsin State Amateur.