By Len Ziehm CENTREVILLE, Mich. -- The Scott family's five 18-hole courses aren't far from either Island Hills or Yarrow Golf & Conference Resort. All are near the bigger Michigan cities of Kalamazoo and Battle Creek, but the facilities are all quite different - in a good way. Between them they make Southwest Michigan a convenient golf getaway location, especially for players from the Chicago area. Island Hills has been my most frequent stop in the area, and its owner Bob Griffioen is one of the most progressive golf operators in the country. Located in Centreville, Island Hills features a Ray Hearn-designed course, one of about 25 the architect has had a role in creating in his home state. Hearn's original designed opened in 1999. Griffin purchased the property in 2009 and brought Hearn back for extensive renovations in 2010.

This year, though, the story at Island Hills isn't about what Hearn has done to what is already a quality layout playable by all levels of golfers. This spring Griffioen and Andy Mears, who moved over from Indiana's Swan Lake to become Island Hills' president and chief operating officer, unveiled much-needed lodging at the facility. Island Hills has in effect entered the resort business with the opening of the first three Signature Point Cottages overlooking the par-3 17th hole. Each has four and five-bedroom units with meeting/recreation rooms on the lower levels. END_OF_DOCUMENT_TOKEN_TO_BE_REPLACED
South Haven, Saugatuck & Holland, Michigan

Had the opportunity for a quick weekend getaway recently to South Haven, Saugatuck and Holland in the SW Michigan area.   It’s an easy drive from the south suburbs of Chicago or from downtown Chicago.    Stayed at HawksHead Inn for the first time which is 2 Miles from the Lake Michigan shoreline!  What a best kept secret for a wonderful relaxing getaway, with bed and breakfast-style accommodations, wonderful restaurant and a Rolex “World’s Top 1000” golf course right on property.   END_OF_DOCUMENT_TOKEN_TO_BE_REPLACED
By Len Ziehm TRAVERSE CITY, Mich. – Golf course openings are rare in these tough economic times. Three decades ago that wasn't the case, but none back then were as celebrated as Jack Nicklaus’ The Bear at Grand Traverse Resort.

Grand Traverse, then just five years old, took an extraordinary step when The Bear was ready for play. Virtually every member of the media covering the 1985 U.S. Open at Oakland Hills was invited to play the layout the day after Andy North won his second Open title, and most of them showed up. That type of sendoff for a new golf course was unheard of, and media members from throughout the country found the layout appropriately named. It was indeed a bear. END_OF_DOCUMENT_TOKEN_TO_BE_REPLACED
By Len Ziehm AUGUSTA, MI. – Michigan-based golf course architect Ray Hearn has made an impact in Chicago with his work at Flossmoor Country Club, one of the area’s top private facilities, as well as at Mistwood in Romeoville, one of the best public courses. If you want to test more of Hearn’s work you don’t have to go very far. Two of his earlier works are just over the Michigan line, and they’d make good stopovers for those who plan to attend the second Champions Tour major tournament in Michigan this summer.…continue reading → 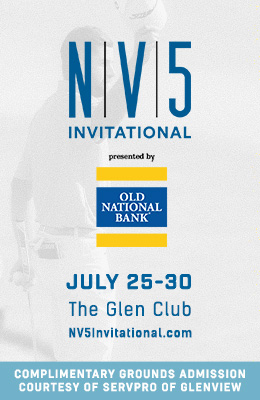